The speculation is that the police, who operated with the help of local gangs, are behind this travesty. This is what happens to unarmed Leftist student protestors in Mexico, and the fact of the matter is, this could happen anywhere. Truly disturbing. 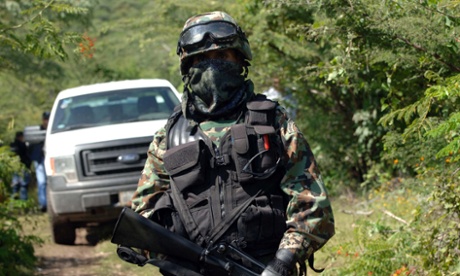 A Mexican navy marine guards the road that leads to the site of an alleged clandestine mass grave near the city of Iguala, Mexico.

A mass grave has been found on the outskirts of the Mexican town of Iguala, where 43 students went missing on 27 September, officials say.

It is not clear whether the bodies found in a pit are those of the missing students, who were last seen being forced into police vans.

The group had travelled to the area, in the state of Guerrero, to take part in a protest over teachers' rights.

Twenty-two police officers are being held in connection with the shooting.

Witnesses said that most of the survivors - all trainee teachers - were bundled into police vans before disappearing.

Some had gone into hiding and contacted their relatives after several days, still fearing for their lives. 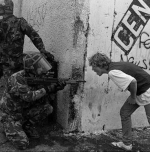 Ths is what pacifism leads to.
Death and defeat.