I think that weak-kneed fellow who spoke toward the end more or less embodies the typical RevLeft member. "I just don't want to be somewhere where I'm uncomfortable." Are you serious? This is "revolutionary" material? Quite revolting indeed.

For our part, we need not praise nor immerse ourselves in mainstream working class culture, but we need not condemn it nor express hostility toward such inclinations. We must, however, engage the working class. Due to the fact that most of the contemporary Left today consists of various languishing subcultures, it fails entirely in this regard. I believe it is this subcultural aspect that is most pernicious, for it explicitly alienates the largest segment of the proletariat.

As it stands, our left-wing current should consciously detach itself from other modern "leftist" groups, which seems to be the general consensus amongst us (in the RSF, at least) in any case. Collaborating and extending solidarity to other organizations should be conducted on a strictly individual level, for most are simply not worth the effort.
_________________
"Let us finally imagine, for a change, an association of free men, working with the means of production held in common."

Even the most bohemian segment of the early socialist movement (the activists operating out of Greenwich Village in the early 1900s, for instance) recognized the imperative there was in not belittling working class people or being intimidated by them. The problem is that revolutionary politics has become a subculture unto itself over the past few decades. This, as I frequently stress, is attributable to the contemporary Left pushing to the fore unpopular identity politics. Not only are the effeminate males who constitute a considerable portion of the Left today intimidated by proletarians—for calling them "faggots" in high school, as the young man castigating Michael Albert in the video claimed—but they realize that the political causes they most cherish would be ridiculed by many members of the working class. I mean, it's quite obvious that accusing working people of being "racist" for opposing immigration or "sexist" for engaging in penis-in-vagina intercourse isn't exactly going to go over well.

Instead of setting aside these ridiculous and divisive causes and asserting the primacy of the class struggle, the hipster Leftists retreat back into their little "open mic poetry" events or local indie concerts. The reason being that they really don't care about achieving liberation for the working class. They only get involved with ostensibly socialist and communist groups because they rather enjoy the shock value it generates, and they like feeling good about themselves for "fighting the man." It's a sad joke and must be opposed at all costs if we hope to accomplish anything substantive in our lifetime.
_________________
RSF Executive Committee (Chairman)
"The dogma of human equality is no part of Communism . . . the formula of Communism: 'from each according to his ability, to each according to his needs', would be nonsense, if abilities were equal."
—J. B. S. Haldane

"Nationality. . . is a historic, local fact which, like all real and harmless facts, has the right to claim general acceptance. . . Every people, like every person, is involuntarily that which it is and therefore has a right to be itself. . . Nationality is not a principle; it is a legitimate fact, just as individuality is. Every nationality, great or small, has the incontestable right to be itself, to live according to its own nature. This right is simply the corollary of the general principle of freedom."
—Mikhail Bakunin 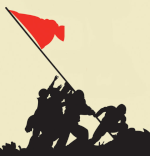 Watching this months ago has actually changed how I interact with people and how I view hobbies that I find silly. I strongly feel that when Michael Albert and the like become more popular the Left will regain some of it's strength that was squandered as Celtiberian stated.
_________________

I disagree adamantly with Albert. I don't watch sports, I think that proffessional sports should be abolished, and I think the same of publically organized hierarchical religious bodies.

Spots is the worst example he could have chosen, sport is the pure manifestation and tool of capitalism, being different fundamentally from the medieval chivalric games and the ancient agon.

I'm not talking about recreation, which can superficially take the same form as some modern sports, but about proffessional sports.

A small number of people think about sports as a historical, not mythological, phenomenon, and few people know that modern stadiums and leagues of competing teams coincides with the won battle for the 8-hour working day. The "father of Olympism" Pierre de Coubertin, an explicit fascist, said how with that change there has to be conducted "a colonization of the working people's leisure time" in order to pacify us, and how sport is the best way to do this.

Of course, with the development of technology, other spectacles, distractions, manipulations and pacifications of the working people have become a part of mainstream, pop "culture", like music, tv, pornography, etc. and I simply do not accept that as the working class culture, I see that as capitalist culture that is a correlate to the working people's false consciousness.

If someone's interested in the analysis of sport as a part of capitalism, there's a lot of material here:

"But we must organize people in sports bars". Nom we don't. I am not trying and don't want to organize the people in sports bars, I'm trying to organize people in the workplaces and communities. I've been agitating on workplaces for years, talking to people, explaining in laymen terms [libertarian] socialism and arguments for it, and I've had fair ammount of success even though I've been fired for that more times then I can remember.

Screw the sports bar, people go there to drink and to watch sports, they are not going to listen about stuggle while indulging in leisure and they are not going to listen about class consciousness and solidarity while being immersed in an activity that puts parts of the working class in frenzied oppossition to each other on the basis of their support for this or that group of rich and unproductive people.

If the faux left in the UK didn't look like a fucking Martians and perhaps were actual individuals involved in the community instead of being a rent-a-mob or outrage queens the actual working class might pay them some attention.
_________________
Take notice, That England is not a Free People, till the Poor that have no Land, have a free allowance to dig and labour the Commons, and so live as Comfortably as the Landlords that live in their Inclosures. For the People have not laid out their Monies, and shed their Bloud, that their Landlords, the Norman power, should still have its liberty and freedom to rule in Tyranny.-Gerrard Winstanley & 14 others TheTrue Levellers Standard Advanced - April, 1649

Too many so-called 'activists' are content to sit on their asses and lament how "far behind"/"undeveloped" ordinary people are compared to their particular clique.

It's just 'holier than thou' elitism masquerading as class politics.

Leveller wrote:I disagree adamantly with Albert. I don't watch sports, I think that proffessional sports should be abolished...

You're missing the point. I'm not really a big sports fan either. It's not about having to like professional sport or think it is a good thing. The point is that you shouldn't hold those huge numbers of people who do enjoy these things in scorn. It's about being able to communicate with the majority people and not isolating yourself in some 'activist' clique.